Picking a Metal Roof Repair Company in Austin You Can Trust

Flat Roof in Round Rock? 6 Roof Repair Issues to Watch Out For

Read
by Tom Green on May 28, 2019 Austin Roofing Contractors

6 Roofed MLB Stadiums That'll Have You Looking Up!

A roof isn’t just a functional element but an amazing opportunity to make an impression. One of the best places to see this are in sports stadiums.Some of the most-loved stadiums are known for iconic roofs. And there’s no roof more striking than modern MLB stadium roofs!

The weather’s getting warmer and it’s time to play ball! If you’re taking in a game this season, you might have the chance to see some rocking ballpark stadiums. Retractable stadium roofs make it easier for fans to enjoy extra innings no matter the weather!

Like everybody else, roofing contractors love to watch their favorite teams in action. When we hit the bleachers, we also get to enjoy these pinnacle achievements in roofing.

Check out these incredible stadiums with really remarkable roofs:

Chase Field is the storied home of the Arizona Diamondbacks. Its retractable roof is made up of an astounding 9 million pounds of steel. The roof can be opened or closed in four minutes flat, thanks to a pair of 200-horsepower motors. Its ability to open to any position means sunlight stays on the field, not on your back.

Marlins Park is small, but mighty – it’s the third smallest field in Major League Baseball. For all that, though, it’s a park where you can expect game day action, rain or shine. Thanks to specialized shutters and a heat-proof membrane, the roof fends off the worst Florida storms. Retractable glass panels can give visitors a breathtaking view.

Miller Park’s fan-shaped roof makes it instantly recognizable. Composed of seven distinct panels, it stretches 600 feet from home plate down to the outfield. Five of the seven panels are fully mobile, but they can all be shut tight during inclement weather. The roof is open for games where the temperature is at least 60 degrees and there’s no precipitation. 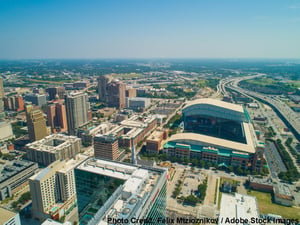 Austin locals may have visited this one – it’s in Houston, Texas. The Houston Astros are the home team who have helped put MLB back on the map around here. Everything about this roof was intended to help it last stronger and longer ... the goal: 50 years, with the lowest levels of maintenance. Three million fans visited in the inaugural season back in 2000.

Located in Toronto, Canada, the Rogers Centre is notable for being the first-ever fully motorized stadium roof in North America, built in 1989. Its age has led to some occasional issues – for example, it takes a whole 20 minutes to open up. Even so it’s a singular achievement by top roofing contractors.

T-Mobile Park is the reason Seattle has its Mariners, who were ready to decline a long-term stay in the city if ground wasn’t broken on a park by 1996. This 9-acre stadium was the result along with its three movable roof panels driven by 96 (!!) 10-horsepower motors.

What Austin Roofing Contractors Want You to Know About Hail Damage